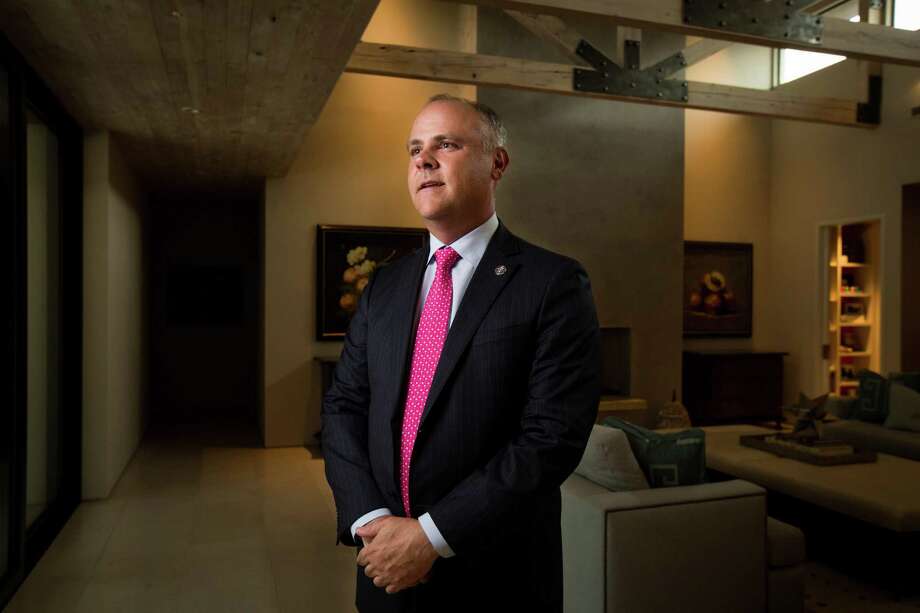 Brad Beckworth, a partner with Nix Patterson, is pictured on Thursday, Sept. 19, 2019, at his home in Austin, Texas. (Michael Minasi for the Houston Chronicle)

Having argued this past summer in an Oklahoma courtroom that Johnson & Johnson falsely and deceptively marketed its prescription drugs and contributed to that state’s opioid crisis, trial lawyer Brad Beckworth credits his success of persuasion in the landmark case to an evening in the Conroe High School cafeteria.

Beckworth became a skilled orator one late spring in 1990 during the Conroe High School football team’s annual banquet. The Tigers’ head coach, Toby York, asked him to address his teammates. A teenaged Beckworth prepared a speech and was ready to read it. As he approached the microphone, he changed strategy.

“I crumbled my notes up and put them in my pocket and just spoke from the heart. That’s how I knew I really enjoyed doing that,” Beckworth said, adding “rarely” using notes is “something I’ve done my whole career,” including while delivering hours-long opening and closing arguments in the opioid trial.

Handed down Aug. 26, the judge’s decision ordered Johnson & Johnson to pay $572 million to an Oklahoma plan to abate the crisis through patient treatment and care. The trial is the first time a health care company has been held accountable for how it promotes use of its opioid products.

The banquet speech is one of the moments from Beckworth’s small-town upbringing that molded the 46-year-old from a football-loving kid in Conroe to an underdog-supporting champ in the courtroom. That upbringing was something Beckworth’s parents, Nann and Sammy Beckworth, made sure to provide him with.

To avoid the urbanization creeping toward The Woodlands area from Houston, Mr. and Mrs. Beckworth,settled down in Conroe while their son Brad and daughter Kami were small children. The couple, now in their 70s, wanted the kids to enjoy a small-town childhood like the ones they had growing up in East Texas.

“Everybody knew everybody,” Beckworth said about Conroe. “It didn’t matter whether you were rich or poor, what side (of town) you came from.”

The football field in Conroe High’s Buddy Moorhead Stadium was a focal point of community life in the 1980s. The city’s population well under 27,000, half of the people would follow the Tigers football team on the road when they were deep in the playoffs.

“For a long time (Conroe High) was a powerhouse,” Beckworth said. “You always heard stories about what a privilege it was to play.”

In between exploring creeks and woods, an 8-year-old Beckworth and his friends would pretend they were on the varsity team on the yard of his home off Longmire Road. As twilight set in on Fridays in the fall, the open prairie land surrounding the house would pick up the warm-up music stretching from Conroe High’s band at Moorhead.

Once in high school, Beckworth, who described himself then as being “short, fat and slow,” realized to win a coveted spot on the varsity team he would need to outwork everyone else.

“I always felt like to achieve things I had to work a little harder than everybody else, and I did,” he said.

He started strength and conditioning, lifting obsessively to the point the football coaches would lock him out of the weight room.As a center on the offensive line, he committed himself to learning all the plays of the team, as well as other player’s positions to guide them on the field.No. 50 on the black-and-gold team, Beckworth became a varsity player his sophomore year.

When Beckworth graduated, the underdog had grown into a brawny 6-foot-1 and had developed a reputation as a hard worker on and off the field. He did manual labor and had been operating a lawn mowing business since 11.

Kenny Hammond, Beckworth’s offensive-line coach, recalls a Friday night game in Lufkin where Beckworth’s reliability shined through. Hammond realized the tough-to-beat Lufkin High Panthers were carrying out a completely different defense play than what the Tigers had prepped for. Hammond on the sidelines started yelling at Beckworth about the change. Beckworth looked back at him, signaling an OK and calmly said, “Coach, I’ve got this.”

The Tigers went down on their first possession and scored a touchdown, going on to defeat the Panthers.

“If you looked for somebody that the other players looked up to and kind of check to see what he was doing, that was Brad,” said Mike Crowl, his defensive-line coach.

The tremendous undertaking of heading up a lawsuit against Johnson & Johnson required a lawyer uniquely in tune with the disadvantaged and skilled in showing up the competition. The Oklahoma Attorney General’s Office brought in Beckworth and his law firm, Nix Patterson, as outside counsel to tackle the case.

Opioid addiction has been plaguing Oklahoma for years. The state in 2017 experienced 388 opioid-involved overdose deaths, according to the National Institute of Drug Abuse.

“I’ve always tried to help the underdog. My law firm is built on that,” Beckworth said, adding that Johnson & Johnson “will try to outspend you and beat you down.”

Beckworth’s squad of about 15 litigated opposite 150 to 200 attorneys and combed through more than 90 million pages of court documents. The team took up residence in an Oklahoma office, toiling away 18 to 20 hours a day, seven days a week for about nine months.

“When you oversupply, people die. They get opioid use disorder, families fall apart, babies get abandoned, the foster care system goes out of whack and we have a billion-dollar problem,” Beckworth said in closing remarks, adding, Johnson & Johnson “was greedy … It’s all about greed.”

Beckworth’s parents set benchmark goals for him, starting with football and continuing on to what his mother called his calling: being a lawyer. At 10, he had decided on that as a career, sitting in on civil trials at the Montgomery County Courthouse while in high school.

Shane Simpson and Beckworth became friends in junior high. Now a physician with a practice in the city of Montgomery, Simpson looks back fondly on how the two in college would attend Houston Oilers playoff games at the Astrodome.

“He had an inner confidence and he knew he could accomplish anything he wanted,” Simpson said about Beckworth wanting to be a lawyer.

The opioid trial was not the first historic lawsuit win for Beckworth. In 2013, he represented celebrated Texas A&M University football quarterback Johnny Manziel, a distant cousin. He triumphed against the NCAA’s efforts to impose a multiple-game suspension on Manziel for earning money as a college athlete.

He and his wife Stacey have been married for 24 years and have two teenage daughters in high school, Caroline and Katie. The family lives in west Austin.

But Conroe is never far from his mind. While unloading on Johnson & Johnson in his opening remarks, Beckworth went out of his way to allude to downtown Conroe’s Crighton Theatre.

Trying cases throughout the country, Beckworth said his small town background has helped him connect with everyday people in the courtroom.

“You can go back to your childhood and think about the people you knew and grew up with. We all came from somewhere, have roots that inform who we are,” he said. And Conroe “was really a great place to grow up.”